What Is The Difference Between LTE And VoLTE Technology 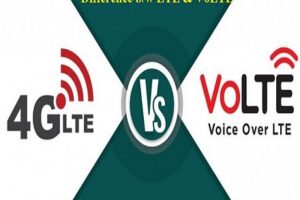 Till a year ago, most of the people used to have only 3G phones but with time the technology of smartphones has changed and people now have 4G phones and the internet speed is also much faster than 3G. Let us tell you that most of the new phones you buy now see you or LTE written. Many big smartphone companies have started launching their devices with 5G support as well. In these, the internet works at a much higher speed in 4G than in 3G. Because most of the work is done through the phone, in such a situation if the internet speed does not work properly then there is a problem. We spend many hours on the internet every day. Today in this article we will know what is LTE and VoLTE? how does it work and what is the difference between VoLTE and LTE?

1G has been used for the first time. The journey from 1G to 4G is not only a change for the Internet world, but also a change. 4G has G means generation. Whenever there are new technologies in the phone, they are added. First we need to know about 4G before read to difference between VoLTE and LTE.

The full name of 4G is Fourth Generation Technology i.e. fourth generation cellular network. Instead of 3G technology, 4G provides much better internet speed. Its job is to provide fast internet. 4G technology is five times better than 3G. If you are getting a good 4G network then its speed is 100Mbps. Telecom companies have to fulfill the conditions related to the International Telecommunication Union (ITU-R) Global Standard i.e. International Mobile Communications-Advanced before availing the facility of 4G network. Only after fulfilling these conditions, the telecom operator can call its network 4G.

Read Also : How To Increase Internet Speed In Laptop

Now talk about 4G LG. Of. You have 4G LTE status in all telephones. At the same time, we also work to improve. LTE is another name for 4G. The full form of LTE is Long Term Evolution. There is a win-win area of ​​the 4G sector which mobile is better. It is a very advanced technology of 2G (LTE) and 3G network. 4G speed is higher than 2G and 3G and works fast. LTE provides 100 Mbps download speed and 50 Mbps upload speed. You have handset with LTE And if there is a SIM too, then internet is needed for calling.

One of its biggest drawbacks is that if you using phone calls while running the internet in LTE, then the internet that is there is turned off and you can’t use internet. If we make a video call in LTE, then we have to take the help of third party apps like skype, whatsapp, google duo etc.

VoLTE is also a part of 4G and LTE. The full form of VoLTE is Voice over LTE. This is a newer technology than the other two. In this feature, you can use the internet even during the call. Along with this, you get a much better internet experience in VoLTE as compared to LTE. This technology comes with packet switch instead of traditional circuit switching, which has good sound quality. VoLTE not only improves the call quality, but in 4G VoLTE, one can easily download movies or web pages from the internet.

First of all switch on your phone, then turn on internet, after that if VoLTE symbol comes close to signal strength then it means that your mobile is VoLTE enabled. Otherwise it will display G, E or other characters like 2G, 3G, 4G.

Simultaneous voice and data calls: It has the ability to use data simultaneously for calls. With this, we do not face any problem in replying to someone’s urgent message.

Video Calling: We were able to make video calls using other software like Skype. But by using it we do not need any other 3rd party software.

Read Also : What To Do When Laptop Is Not Responding

VoLTE should be supported by handsets in order to obtain VoLTE services. The VoLTE feature is not available in all the mobile handsets but now most phone this facility available and HD voice call can only be made between two VoLTE compliant handsets. I hope now you understand what is the difference between LTE and VoLTE.

Difference Between LTE and VoLTE 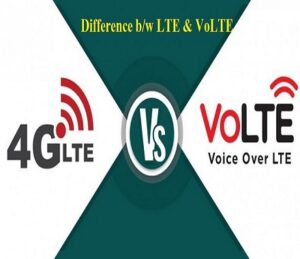 HD video call quality is better on VoLTE 4G network and clear sound can be heard. If you want better calling quality in your smartphone then your mobile should have VoLTE.