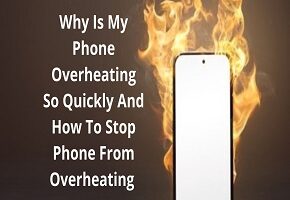 Nowadays almost everyone uses smartphones. In today’s time, we need a phone somewhere in all our work. From morning till evening, we do many things with the help of our phone, and because it is an electronic device. One of the serious problems of a smartphone is its overheating. This does not happen in every smartphone, but many users have to deal with this problem. The phone suddenly starts heating up while playing games or watching videos. Sometimes this happens even when it is on charging. If the phone gets too hot then the device can be damaged, as well as its performance also suffers. Today we will tell you Why is my phone overheating so quickly and how to stop phone from overheating.

Our smartphone is an electronic device. If we use an electronic device a lot, it is common for it to get hot, for example you can watch TV, freeze, computer, speaker or any other electronic device. For example, if you are watching TV for 1 hour, then touching the back side of that TV also remains hot or if you are using laptop then its lower part also remains hot. Similarly, the use of all the machines in the house causes heat and this is common. Similarly, our phones also get hot but sometimes they become so hot that we have to face many problems.

The problem of overheating in Android smartphones is not new. This is usually attributed to high display brightness, connecting to Wi-Fi for a long time or playing too many games. Sometimes this problem can be seen even in summer when the normal temperature is 40-45 degrees. Sometimes the battery itself generates heat while using the phone or while charging. Due to the small size of the battery in a smartphone with a slim design, the processor and battery heat up quickly. Whenever the phone’s processor gets hot, it has a direct effect on the battery as well.

Read Also : How to increase internet speed in laptop

Why is my phone overheating so quickly?

If your Android phone is heating up, then first of all look at which feature is getting hot by using it. For example, many phones get hot during charging. Some phones get very hot during browsing and some phones also get hot during calling. At the same time, many phones also get hot when kept. Apart from this, many apps run in the background and they also use internet data pack along with processor and RAM. In this post inform you Why is my phone overheating so quickly? 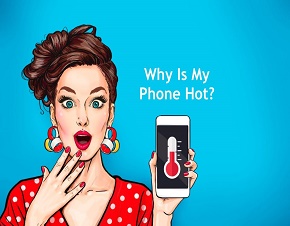 Today, you can do multitasking in all phones, now in such a situation, many mobile apps that you use in your phone stay in the background and consume your phone’s battery, due to which your phone starts heating up. Or you must have also seen that many applications use your data i.e. internet connection in the background. Apps are also a reason for phone heating problem.

With the advent of Jio 4G, our habit of shutting down the internet has been given up. Our mobile internet is always on. Like this, location or GPS, Bluetooth, WiFi and many other functions are left open which are not being used at that time. Keeping these functions on continuously puts pressure on the battery and heats up the phone.

4. Keeping or using the phone in the sun

Read Also:  What to do when laptop is not responding

Keep updating the phone’s apps from time to time. This app remains Bugs Free. Apart from this, updating the software of your phone can also solve the heating problem.

Always charge your phone with the charger that comes with it. Do not use the charger of any other phone and do not give your charger to anyone else.

Read Also : How to lock folder in external hard drive

7. Malware/Virus in the phone

Malware/virus can cause excessive heat in your Android phone. Because malware/virus doesn’t care much about the health of your device, they only need your data.

8. Due to excessive use of camera

If you use your phone’s camera for a long time like recording a long video with phone camera. But mostly for this reason the phone does not get hot but in some cases it does.

Read Also : How to transfer photos from phone to laptop wirelessly

If you are fond of playing games and you play games in Android mobile for hours continuously, then in such a situation your phone’s RAM and graphics card and processor and many other things together have to work at high speed and so on. Because of this, your mobile phone starts heating up, now in such a situation you think that your phone has gone bad.

10. Due to high data processing

One of the major reasons for phone heating is sometimes due to excessive data processing.

11. Due to full internal storage

Even if your phone’s internal storage is full, then your phone may still be facing the problem of overheating.

12. Because of mobile cover

If you have put such a mobile cover on your smart phone, which is completely packed and is preventing the smart phone from coming in contact with the environment, and due to which the radiation of the phone stops. So this generates heat in your smart phone, and then there is the problem of overheating.

13. Due to prolonged use

If you are using the phone continuously for a long time, then it is natural for it to get hot.

15. Hotspot, because of functions like WiFi and Bluetooth being turned on

If your mobile connection like hot spot, wifi and bluetooth is on for some time. Even then your mobile can be hot.

Read Also : Best mobile Under 10000 on Amazon In India

How to stop phone from overheating?

We have already told you the reasons for overheating of the mobile. Now let’s have their solutions, that what to do when the phone heats up. 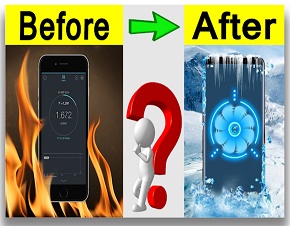 1. Do not charge the mobile again and again

The phone is a bit old and is getting hot while using any feature, then you should take a look at the software update once, because many times the phone gets hot due to software. Software update also fixes this problem.

3. Quit applications running in the background

4. Use an Android Phone with Battery Optimization Features

Use an Android phone with battery optimization features. Replace bad battery and cable and do not charge old phone battery to 100%. When the phone becomes hot, remove the case made of insulated material. Battery Optimization lets you see which application is using the most battery. Close the application which is using more battery from here.
A case study has revealed that Google Maps and Google Apps use the most battery. So if the phone is getting hot then it is better that you keep some of Google’s apps off.

If the phone is heating up while browsing, then the above-mentioned remedies can be useful for you. On the other hand, if you activate compress data by going to the settings of the browser, then it will also make a little difference. Not only will this cost data, but the phone will also get a little less hot.

7. Do not use mobile while charging

If the phone is heating up near the speaker while making a call then immediately reset the phone to factory data. By going to the phone’s settings, you will find Factory Data Reset in Backup & Reset. If even this does not solve the problem then you will have to visit a service center.

9. Use a good quality cover

If you use mobile cover then use good quality cover. which is not fully packaged. If your phone overheats, remove the cover while charging, or if possible, do not use the cover.

11. Do not use other phone battery

12. Do not leave functions running after use

Do not keep functions like hot spot, WiFi and Bluetooth in the phone for a long time. Shut them down as soon as the job is done.

If you are using mobile continuously, then do not do this. Close it for a while, it will work for its heat. Apart from this, you can also turn off your phone for a while. This would be a great solution.

15. you replace the phone

If your phone is new and under warranty. Despite this, if there is a problem of overheating, then it is better if you replace the phone without any kind of tampering.